Before we can jump into learning about the various regions of France, the grapes, wines and producers we need to have at least a basic understanding of the French wine classification system which is the basic model for most European countries and has evolved over the years. It is rather complicated so while it is intended to convey a certain standard of quality for wines to the average consumer it can also be a source for confusion.

In 1924 Pierre Le Roy de Boiseaumarié (1890-1967) and the vinegrowers of Châteauneuf-du-Pape (CdP) decided to delineate the region as a production zone with an established set of standards similar to the way in which in 1411 cheese producers had done for Roquefort cheese. Then in 1935 he co-founded the Institut National des Appellations d'Origine (INAO) and spearheaded the creation of the Appellation d'origine contrôlée (AOC) system. The AOC system was then put in place in 1937 in all of France.[3]

In 1954 the Vin Délimité de Qualité Supérieure (VDQS) category was added to the system as a transitional category for those lands being considered for promotion to AOC status.[4]

In 1979 the Vin de Pays (VdP) category, which means “wine of the land” or “country wine”, was added as to encourage producers to create a wine that was a “superior table wine”. It was required to be an unblended wine of limited quantities, of certain specified varieties, and contain a specified alcoholic strength. [5]

The final and lowest classification of wine was Vin de Table (VdT) which are uncomplicated everyday wines that are usually a blend, but possibly a varietal based on a well-known grape variety. Thus thee four quality categories in France were as follows:

The top category also has two sub-classifications which are defined as:

Grand Cru is the very highest classification of French wine which can refer:

(a) The plot of land where the grapes are grown which is used in Burgundy, Alsace, Champagne, Languedoc and the Loire Valley. This class implies a level of quality although they actually designated location.

(b) The Chateau that produces the wine such as in Bordeaux.

Then the French government officially announced that the long-standing AOC (Appellation d 'Origine Contrôlée) system for wine would be replaced by a simplified set of categories with the top quality being an AOP (Appellation d'Origine Protégée).[6] The revised quality categories are:

Then in 2012 the Vin de Table category was renamed Vin de France so current quality categories are designated as follows: 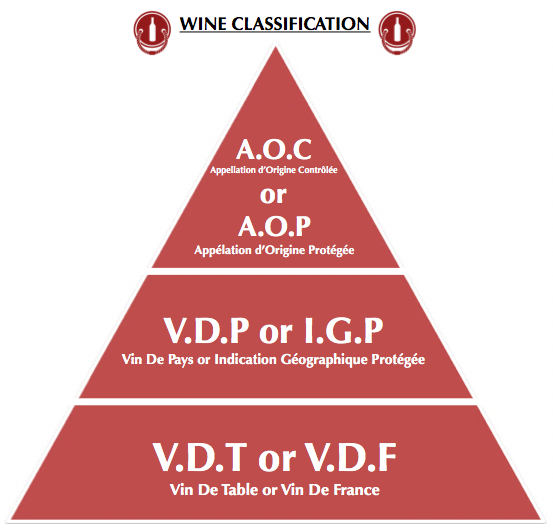